The History of Our School

The Raintree Christian Academy was established in April of 1988. It was previously an existing daycare under another name for eight years. Tom and Christi Teufel purchased the property and changed the name and format of the business. There was a grand opening celebration and dedication service held in May of that year. Over the years the school has seen God's hand in it's growth and development.

Christi Teufel asked Ms. Marilyn if she would like to pioneer the beginning of our elementary program. And that started our very first kindergarten class using the Abeka curriculum.

The kindergarten class was a tremendous success the previous year that Raintree Christian Academy decided to open up the first grade class and the other upper grades in the succeeding years.

The school received a generous blessing from one of our benefactors who purchased and donated our current school building.

Marilyn and Loy Tiglao took over the Raintree Christian Academy, endeavoring to continue the dream that Christi and Tom Teufel had of bringing excellence to education. 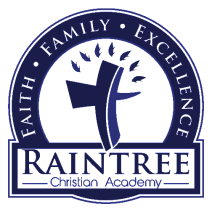 Recommend this page on:

We can be reached during the following hours:

Parents that pick-up their students after 3:30 pm will be charged a late pick-up fee.

Click here to get more information about Alma - a new software system that will help RCA better manage school, classroom and student information.